Clive Philpott is a writer, curator and one of the leading experts on artists‘ books. In 1969 he became the librarian at Chelsea College of Art and design expanding the college’s art book collection at a time when few people were collecting. He later went on to work at MoMa, New York as the museum’s Head of Library.

The starting point of the exhibition is taken from Marcel Broodthaers’ art book Voyage on the North Sea (1974) of which there was a film of the same name made 1973-74. Broodthaers writes “It is up to the attentive reader to find out what devilish motive inspired this book’s publication” and the exhibition sets out to question and explore ‘motive’ and ‘decoy’ within artistic and curatorial practice.

Both a film and book, A Voyage on the North Sea were distributed together as part of the same package. Thematically connected, the works mutually consisted of 19th and 20th century nautical images including photographic reproductions of an amateur ‘grand master’ painting along with a photograph of a contemporary sailboat. This work, along with many of Broodthaers’ written, object-based and site-specific environments were not widely known in his lifetime – but this work has latterly been canonised within the sphere of contemporary art, not least in part by attention of the renowned US critic Rosalind Krauss in such works as A Voyage on the North Sea: Art in the Age of the Post-Medium Condition (2000).

Looking at artists who, like Broodthaers, approach art production from a post-medium perspective, the exhibition will display works from Lawrence Weiner and Ed Ruscha that contemplate the mysterious and somewhat perilous nature of making and showing art – by being, manifestly, ‘at sea’. Reproductions of nautical works by Willem van de Velde the Younger, Peter Monamy and J.M.W. Turner, unobtainable in their original formats, will be presented via forms of secondary documentation, endlessly accessible and reproducible via printed or digital means.

Book works by Helen Douglas and Elisabeth Tonnard as well as other works from the Special Collections at Chelsea will be on display alongside ephemera and a rowing boat from “X marks the Bökshop”, a book shop and project space run by Eleanor Von Brown for independent publishers based at Matt's Gallery.

This exhibition is curated by Clive Philpott in collaboration with CHELSEA space and MA Curating and Collection 14/15.

To purchase the accompanying publication, which I have contributed The Artists' Hymnal, please click here. 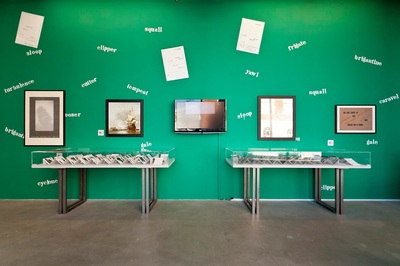 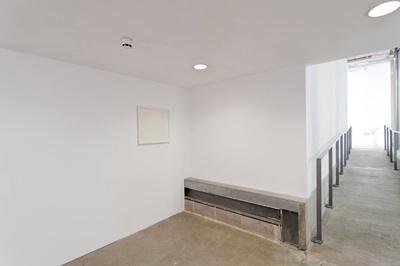 CHELSEA space is a public exhibiting space where invited art and design professionals are encouraged to work on experimental curatorial projects that may not otherwise be realised. From 2014 the Exhibition Studio Workshop was introduced into CHELSEA space, showing a changing selection of works and objects from the CHELSEA space, Chelsea College of Arts Library and Special Collections, in addition to the established exhibition programme. The Exhibition Studio Workshop is the practice-based strand of the new MA Curating and Collections postgraduate taught course.