Live is an exhibition that showcases the curatorial practice of the 2014-15 MA Curating & Collections course. Each student has made a selection or work(s) to be shown around the theme of ‘Live’, related to their personal research interests. The resulting exhibition has been curated collaboratively to create a cohesive exhibition across the two sites. Grace Acton Roberts has curated a display called Milk.

You can view the exhibition catalogue below or click here for a pop out version of the catalogue. 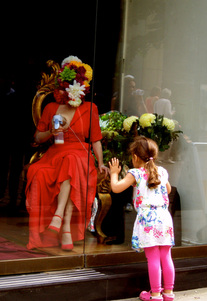 Milk questions what society deems appropriate in the public and private domains; opening discussion about the visibility and normality of breastfeeding, exploring how the female body and the mother/child relationship is viewed. Canavan describes her work as a response “to the fear of the functioning body and the othering of mothers, in particular the milking mother.”

For the performance Canavan is seated in a window, expressing milk using a pump. Surrounded by symbolic objects, her face veiled with flowers, Canavan could be confused for a mannequin, if not for the pump’s motion. The scene is reminiscent of a vanitas still life painting, offering a sanitised version of breast-feeding, with the child absent. Canavan later removes her veil and her husband enters with her son, whereupon they take communion of her milk before she breastfeeds her son. 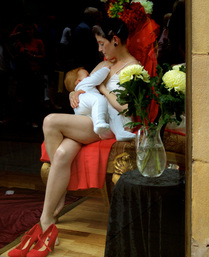 Photo Credit: Juli Watson
With the accompanying biblical text, symbolism and ritual, it is easy to imagine the work as a modern Maddonna and child, but Milk goes beyond the accepted and controlling sentimentality of the patriarchal view of motherhood.

Milk is a political statement. The milking mother is not the accepted maudlin or objectified and sexualised female form we are used to, it is the hidden, oppressed body of the (m)Other. In this Canavan confronts society’s fear of the female functioning body. 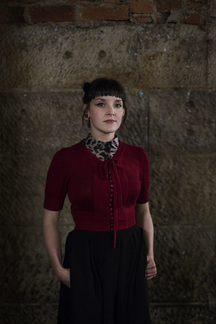 Nicola Canavan is a performance artist based in the North East of England. Her artistic practice, is rooted in action based performance and spans live work, documentations of its products & traces and the re-presentation of these in other forms. Canavan investigates themes around feminism, abjection and ritual with a focus on interpreting or creating experiences in her own body.

She has been performing and showing work nationally and internationally since 2007 within programmes such as Momentum Festival (Brussels), ]performance s p a c e[ (London), Inbetween Time Festival (Bristol), City of Women (Ljubljana) and SPILL National Platform (Ipswich). She has collaborated with Kris Canavan, Predrag Pajdic, Manuel Vason (Double Exposures) and Ernst Fischer and has been awarded the Artsadmin Bursary, the Artists International Development Fund and has been financially supported and mentored by Unlimited,  Live Art Development Agency and Pacitti Company.

http://www.nicolacanavan.com/
Live was part of the wider MA degree show programme 2015 at Chelsea College of Art. You can view the catalogue below or click her for a pop out version of the catalogue.